A complete guide on how to play the Teen Patti game
Posted on 29 Sep, 2022
Game Development 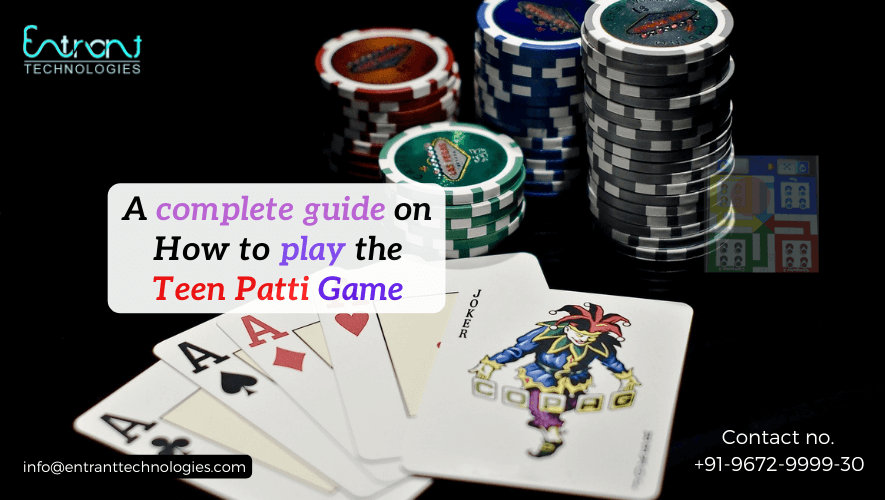 Teen Patti is one of the favorite online casino games in India. This is a simple 52-card deck casino game played by 3 to 6 players. Such as poker, and winning in the Teen Patti games requires both skill and luck. The game is nothing to do with a Joker card. First, the players have to pay their share in the boot amount, the minimum stake that is decoded by the players, and each of them adds a share to the pot. The game begins with the players placing the pot in the middle. New Teen Patti players should learn the basics of the game before playing Teen Patti with real money. If you want to learn how to play Teen Patti then you have come to the right place.

How to Play Teen Patti Online?

Teen Patti is often played by 3 to 6 players and uses a 52-card pack without jokers. Like other rummy and poker games, Teen Patti begins with a wager. Typically, In Teen Patti game Development there must be a certain amount that players are willing to wager before the cards are distributed. After one player has placed a bet and collected the boot amount from everyone, each player is dealt three cards face down.

Once three cards have been dealt to the player and the dealers, the next step is to call or pick up. If someone has played a game of poker before then they must be aware of these two terms. A call indicates that the player will continue in the game but not increase his bet, whereas making a raise means that the player will add cash to the pot, thereby risking more winning or losing than the first bet. Anyway, one must note that betting on Teen Patti is not the same as poker.

In Teen Patti, players need to place all bets in equal amounts, which means once a player bets 2 coins and another player places 4, the previous player has to place 4 additional coins instead of just 2. As the game progresses, the cash amount begins to increase and is won by the person who remains in the game until the end of the hand and has the best hand or highest hand. It is decided on the card ranking from highest to lowest.

Step 1: Each player must make a first bet called 'Ante' and then you will receive three cards, which are placed face down.

Step 2: Players can now choose to look at their card (called seen) or play without looking at the card (called blind). In the foam of seen games players betting amount will increase.

Step 3: Each player must decide whether to place or 'fold' the extra bet and stop playing this round.  Players should remember that in order to continue the game of Teen Patti, the observed players must wager twice the initial ante bet.

Step 5: The one player with the best hand wins the entire pot, otherwise the loser can try his luck again in the next round.

Before learning about the rules and set-up information, players need to check the card rankings. To make things easier we've listed the rankings from highest to lowest. Players are likely to find it helpful to refer them for their first few games.

There are three cards in straight or consecutive order that must be in the same suit and an ace can also be used in a straight.

This is the same ranking as above and again it is three consecutive cards, but they will not be of the same suit.

These are three cards of the same suit and if more players use this card hand, their importance is based on the highest card.

Two cards of the same rank

Of the two pairs, the one that has the highest value is the winner. The kicker's card will determine the winner If the pairs have the same value. Therefore, if there are several pairs of players, compare the overall value of the two cards.

Playing 'Blind' is certainly beneficial for players wishing to use a casino bankroll management strategy. The bet amount required by players is low, especially when requesting a show. The biggest disadvantage is that players do not see their cards clearly.

In the Teen Patti Seen game playing ‘Seen’ means that the players can see their cards and this means that players can play their game with the knowledge of the strength of their hand. This allows a 'seen' player to gamble in a more informative way. Players can choose to lift or fold with full knowledge of the strength of their hand. The disadvantage of this game is that player's minimum bet amount increases.

The ‘seen’ players have a minimum wager amount equal to twice the initial ante. 'Seen' players also cannot request a show against another 'blind' player. Playing ‘seen’ permits a player to make informed decisions while playing Teen Patti online. Also, players can choose to lift, bluff or twist while learning the strength of their hand. Because ‘seen’ players have a higher minimum bet, there is a possibility of losing more money if the players are new to the game and do not understand how to play Teen Patti.

Teen Patti Sideshow or Back show

To access the Sideshow trick, you must look at your cards and place your bet. The last player to bet on his card is most likely to be asked for a sideshow. But players have a choice whether to accept other players' sideshow move requests.

If the last 2 players don't show or pack and the amount managed may be split among them or given back to the players.

In the traditional Teen Patti, players compete against each other to win real money Teen Patti. Each player is dealt three cards and can win either by having the most valuable hand in a showdown or by having all the other players cast their cards through betting. This is a game that does not depend on luck but also on psychology. Played with real money, the goal is not to win each game round. Players want to make the right folds to minimize their losses and maximize the value of the pot at the right time to be the big winner in the long run.